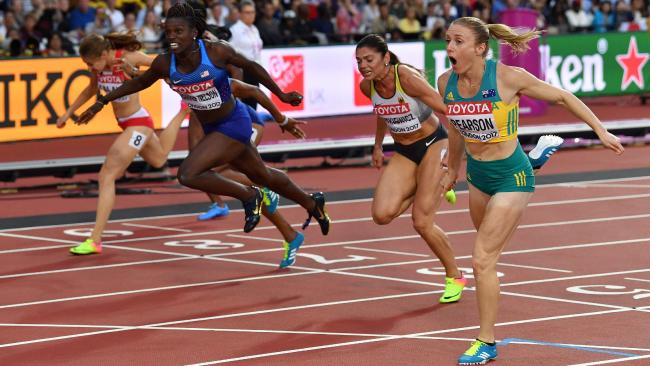 Australia lost the original Betty Cuthbert last week, but Sally ­Pearson has become the Golden Girl for the 21st century.

Her record in the modern era, since the world championships began in 1983, has now surpassed all others.

Cathy Freeman retired with two world titles, one Olympic gold medal and a silver, but Pearson now has all that plus an extra silver medal from the 2013 world titles and she is not finished yet.

After the 30-year-old Queenslander roared down the track to win her second world title yesterday, six years after the first, national head coach Craig Hilliard had no hesitation in putting her at the very top. “She’s No 1, unbelievable,’’ he said. “I don’t get emotional that often but you couldn’t help getting emotional in that with just the whole build-up and what she’s done in the last few weeks. She’s an incredibly steely competitor to do what she’s done.

“It’s hard to compare eras. I don’t think you can, and it would be stupid of me to do that. You can’t. Betty Cuthbert was a freak in herself. In the current era, she’s right up there with the best.’’

Pearson is now one of three Australian athletes who have won two world titles, joining Freeman and 400m hurdler Jana Pittman, and she has done it in the most ­unpredictable of events.

Freeman acknowledged Pearson’s feat on Twitter ­yesterday, saying “What a champion you are’’. To which Pearson responded: “This tweet is Better than gold’’.

Hilliard said that after four years in which Pearson struggled with injuries and was unable to compete at a global level, this was “one of the greatest comebacks in Australian history’’.

More remarkably, she has done that while coaching herself, which is extremely rare at the elite level.

After hamstring and achilles tendon injuries forced her out of last year’s Rio Olympics, Pearson was on the verge of quitting.

After splitting with her original coach Sharon Hannan in 2013, Pearson employed two former training partners, Antony Drinkwater-Newman and then Ash ­Mahoney, to coach her, but ultimately decided that she knew her body best. “I knew that I could do it, I wasn’t worried about writing the program out, I knew what I could and couldn’t handle, it was just a matter of, ‘Am I going to do it right? Is this the right person to do it for me, which is me? … Am I going to be able to listen to my body and be smart about it and look after it?’ I just said: ‘Well, you’re going to have to try’.” Pearson revealed that on the first day of the Rio Olympics a year ago she sat down and mapped out a training program designed to bring her to this peak on this day.

“It took me hours and hours and hours on the first day to write a program out and decide what was best for me and what I could and couldn’t do, being an older athlete, having these injury troubles.

“From the first day I started training I knew it was possible. I knew I could get here and I remember someone saying, ‘You can be the world champion again’ and I didn’t feel awkward about that. When I felt that, I knew it was in me to do it. If I don’t feel that spark, I know there’s something wrong, but I felt it straight away.”

Pearson’s indestructible self-belief is what makes her extraordinary, but she gave a hint of the depths of resilience she had to mine in the moments after she won the world title. “Far out, that was bloody hard,’’ she said. “I was so tired. That was just incredible.’’

Later she would reveal that ­beyond elation or relief, her overwhelming emotion was pride.

“Every single emotion that you can hold in your body just came out when I crossed that finish line. It wasn’t surprise, it wasn’t shock, I was just proud, so proud of what I had done to get here.”

In the final two weeks before the championships, Pearson turned over her coach’s hat to Hilliard and team coach Matt Beckenham so she could focus purely on being an athlete.

She seemed nervous before her heat and her time was not the fastest, but she came out for the semi-final flinty-eyed and ready to sow doubt into the minds of her rivals, particularly the one woman in the field faster than her, the new world record-holder Kendra Harrison.

She was the top qualifier for the final, while Harrison made a crucial error, smashing into the first hurdle, and only just scraped into the final. Pearson smelled blood.

“I knew I was going to be capable of doing well at a major championship, it was just a matter of could she (Harrison), I didn’t know if she could or not,’’ Pearson said.

They were drawn next to each other but as Pearson settled into her starting blocks, she told herself: “Let’s go. Let’s go fast. That is all you have to do, there is no thinking about this, let’s just go.’’

Harrison got the better start, but Pearson was pressuring her by the second hurdle and the American blinked then stumbled as Pearson started to run away from her and went on to win in 12.59sec.

Pearson’s old sparring partner Dawn Harper Nelson, who was the silver medallist behind her in London in 2012, again claimed the silver (12.63sec) and Germany’s Pamela Dutkiewcz (12.72sec) ­completed the podium.

Harrison missed the medals, finishing fourth in 12.74sec, more than half a second outside her world record.