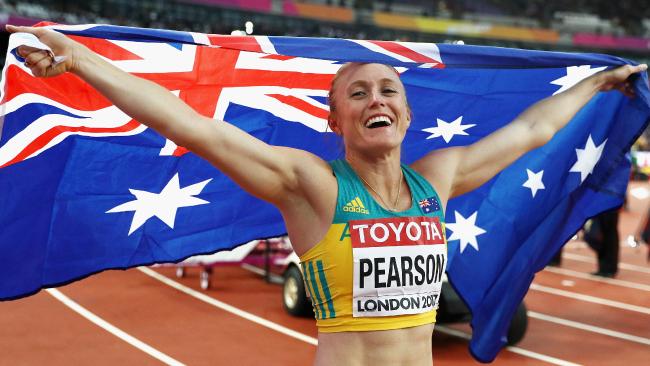 As the enormity of her achievement started to sink in 24 hours after winning her second world title, Pearson reflected back on one of the key moments in her comeback.

Last year she was on a plane going from Sydney to the Gold Coast when she watched a documentary on Lassila’s rise to Olympic gold and then her return after motherhood.

“I was on a plane going from the Gold Coast,” Pearson said. “I was scrolling through the movies on the TV and came across it.

“Her resilience to get back and get to the top again was truly inspirational.”

The Rio Olympics were about to start but Pearson wasn’t there to defend her crown because injuries had forced her withdrawal just a few weeks earlier.

“I was in such a horrible dark place, more so because I’m such a harsh critic of myself,” Pearson told the BBC.

“I watched her movie and she had those what ifs and she still did it, Lydia came out better for it.”

By the time she’d left Gold Coast airport, the 2012 Olympic champion had decided she would not only return to her sport but would also coach herself.

“I was on a bit of a downer at that moment, I’d been let down by a few people,” Pearson said.

“My injuries have been a result of maybe bad coaching, bad choices as well.

“I didn’t really know what I wanted and whether to stay in the sport, whether to retire.

“Then I thought, ‘What the hell am I going to do? I don’t really have anything else but my sport’.

“I walked off the plane and still had the movie stuck in my head.

“As soon as I walked out the door of the airport, I was like, ‘Right I am coaching myself, I’m going stay in sport and we’ll see what happens.”

Pearson, 30, went back to training and within 12 months was the champion of the world again.

“As soon as I made that decision everything seemed light again and easy and I made choices, I made the right choices,” she said.

“The main thing you have to have is resilience. I found that in me after watched I that movie, I found the resilience I needed to come back.

“So I want to send huge thanks (to Lydia) for her putting that movie out which I choose to watch.”

Pearson collected her fifth major championship medal — moving her past the great Cathy Freeman — when she won the 100m hurdles world title in London, six years after she’d claimed her first.