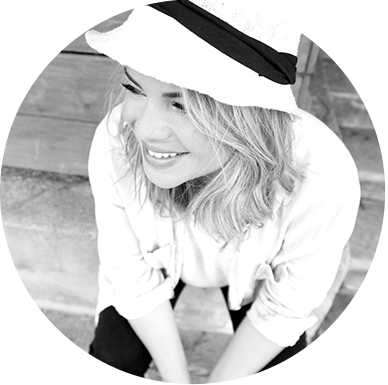 Before working in the film industry, I had trained underneath Lydia Lassila as a young gymnast 17 years ago and then later with her on the Australian aerial ski team. I was a junior athlete to Lydia and had witnessed first hand the most part of her inspirational story.

In 2012, I was working for the world’s leading motion picture marketing firm; Trailer Park Inc in Hollywood. Work became my life and I didn’t have time to exercise, and so a void had accumulated since retiring from sport. I wanted to bring my two passions together; sport and film production. At the time, I decided to go visit Lydia at the Utah Olympic Park water jump facility in Park City, where we had trained together in the past. The Australian aerial team are forced to train overseas for up to 9 months a year because the only option in Australia is a substandard swamp infested with leaches, floating spiders and toads.

Lydia had just returned back to aerial skiing as defending Olympic champion, and I couldn’t believe she had returned to the sport as a mother. I was watching Lydia train with her baby son Kai in the pram parked beside the water jump. Lydia had also explained to me what her goals were leading into the 2014 Olympic Games, that she wanted to attempt a jump called a “full, double-full, full”, which is a quadruple twisting, triple somersault (three flips, and four twists); a very sophisticated acrobatic trick that only the men had accomplished before that time.

Lydia was one of the most determined, unwavering athletes I had ever witnessed. Ever since the beginning of her aerial skiing career, her dream was to perform this trick like the men, but that is only the final chapter to her incredible story. Understanding the complexity of that trick, and Lydia’s back-story, I realised that if I didn’t tell this story, then no one would. So it was then that I asked Lydia if I could produce a feature length sports documentary about her conquest.

We felt we had to educate the audience on the fascinating history of the Australian aerial ski team to set the scene and illustrate Lydia’s drive. It was important to showcase the success of the team, through the times of Kirstie Marshall, Jacqui Cooper and Alisa Camplin, because it really portrays the concept of ‘champions breeding champions’. Through this period there were some real lows when these girls injured themselves on the Olympic stage. It is inspiring though when you see what these women do to overcome adversity, and then triumph once again. This is what makes these athletes so remarkable.

We knew we wanted to structure the The Will To Fly for a broader audience beyond just sports fans. We wanted to make sure that anyone could connect with this woman’s journey trying to achieve the impossible, and that aerial skiing was just the vehicle to tell this story. Part of the success to balancing the sports side of the film was including Lydia’s support team, her amazing and humble family. Lydia’s Sicilian mother Phyllis, and her Finnish mother in law Leena, help Lydia look after her baby Kai throughout her Olympic pursuit. At 2 years of age, Kai could speak Italian, English and Finnish all at the same level! Kai was such a natural on camera that people asked if we had staged scenes with him, which of course we hadn’t. We also show the incredible support by Lydia’s Finnish husband Lauri who is an ex World Cup mogul skier and understands Lydia’s mission. To see how her support team comes together is heart warming for anyone.

We were in the edit suite for a total of 30 weeks. Editor Jane Usher cut the foundation of the film and then we flew out Ellen Dimler, a movie trailer editor from Los Angeles, to work with us on the sports action side of the film. There are certainly some trailer techniques in the film that help separate the sports action to the main edit. This helped with changing the pace in creative, exciting ways. Our composer Thomas E Rouch crafted a powerful, emotive score over six months which has helped mould all of the attributes of the film together nicely.

This is the first sports feature documentary on a female athlete in Australia, so I realised the film’s impact could create a powerful platform to raise awareness around women’s sporting achievements. The Will To Fly impact campaign is launching at the premiere. This campaign is tailored around the main awareness topics explored in The Will To Fly film, which include themes like pursuing your dreams, ‘leveling the playing field’ and inspiring female empowerment. I believe young girls need to see more sports stories being made on our female athletes so that they too can look up to positive female role models in the media.

Lydia inspired me as a young athlete, so I felt compelled to tell her story in documentary form, as I believed it would inspire others. Lydia is an extraordinary athlete and her story and achievements deserve to be understood. 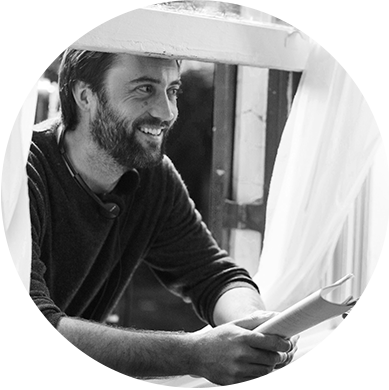 When I first learnt about Lydia’s story I was in the category of most people out there. I had heard of her through some media snippets and was aware of her horrific injury at the Torino Olympics, because the worldwide media had has such a feeding frenzy on that juicy, graphic content.

It wasn’t until I had fully studied Lydia back story that I realised how truly film–worthy her whole tale is. It is filled with triumph and glory, which are sweetened so much because of the setbacks and horrific low points along the way. From the detailed research we did, there were many angles for telling Lydia’s story, but I found it easier to break it into two main story arcs to explore narratively:

1. The story of her as a young gymnast with dashed dreams, to finally reaching her dreams as an aerial skier with the gold medal at the 2010 Vancouver Olympics.

2. Lydia returning to the sport after having a child, with far greater ambitions than ever before. She has the pressure of being the Olympic champion, the pressure of juggling parenting responsibilities, and then the added self-inflicted pressure of performing the most difficult jump a woman has ever done.

The second story adds such fantastic stakes to an expanded narrative, and is peppered with plenty of problems and complications, which makes for great film making. We wanted to focus on Lydia’s ‘second story’ because we could film her through this time, but the audience wouldn’t understand this pursuit if they didn’t understand the first story, her backstory. We had to tell both.

After the first act we learn about Lydia’s devoted family and support network. The film making techniques changes to more ‘cinema verite’ style throughout this time as we are in the moment with her on this journey. The preciousness and sweet innocence of Lydia’s 2 year old son Kai proved to be the ideal element to juxtapose against Lydia’s dangerous pursuit, which really grounds the audiences understanding of the stakes and new pressures that Lydia has set for herself.

Filming in both Finland and China was certainly an adventure and a technical challenge. Standing on the snow in -25 degrees Celsius, you not only get numb toes in your boots, your hands freeze in literally seconds when changing lenses. As we primarily shot with one camera, I had to make sure I captured a variety of angles each day, so we had plenty of options during the edit. This meant hiking up steep hills in the snow with the back-pack and tripod, avoiding other athletes, and also not slipping down the steep in-run of the jump. That would not have gone down well!

Sound can often be overlooked in documentary and we didn’t want to regret a lack of sound material later, so we brought sound recordist Dane Cody with us overseas. Dane came up with the idea of convincing Lydia to wear a radio lavaliere microphone on her whilst jumping. This allowed us to capture a lot of Lydia’s ‘self talk’ that she would go through prior to each jump and in essence, unobtrusively capture what was going on inside her head. To our surprise Lydia was fine with this idea, and got so used to wearing it that it became part of her equipment routine. She surprised us even further when she wore the mic for the World Cup competitions. We were able to capture the detailed sounds of her nasty crash landings in Beidahu Lake in China, and her elations after the huge jumps at the Birds Nest stadium.

We have affectionately described this project as a ‘fruit salad’ of different film mediums, because there are so many archives formats sourced from all over the world intercut with our own HD footage. However this only builds the accuracy of the detail in the film, enhancing the story.

We have endeavoured to make this film as universally accessible as possible through a classical construction of the hero’s journey. The Will To Fly is firstly and foremost a sport story, but is driven by a in-depth personal story, which all audience members can connect with. 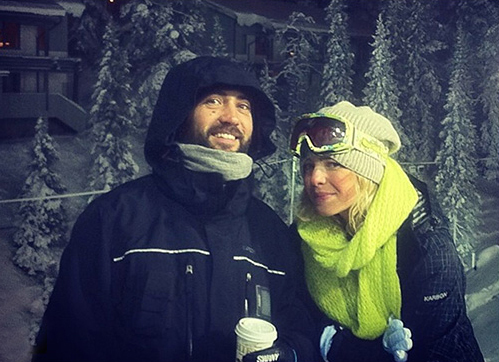 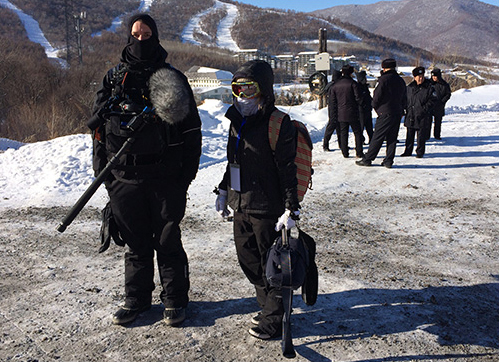 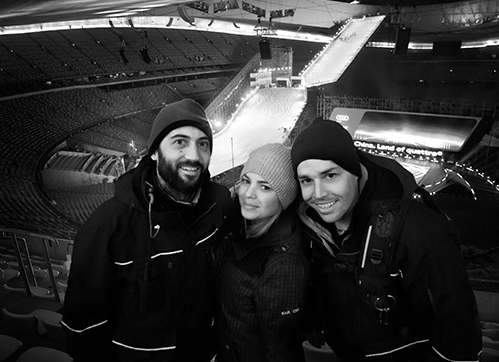 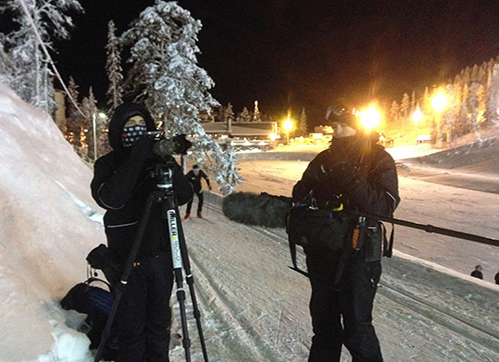 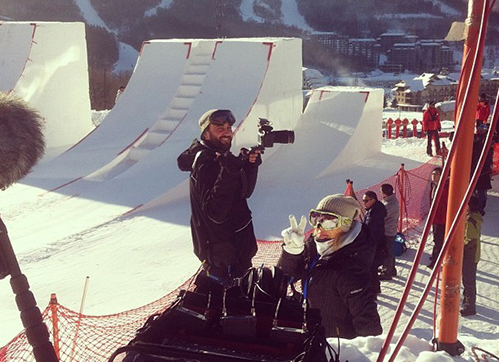 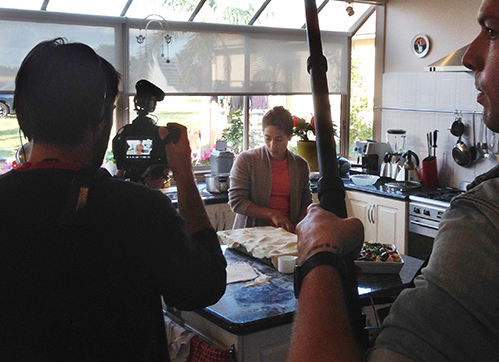 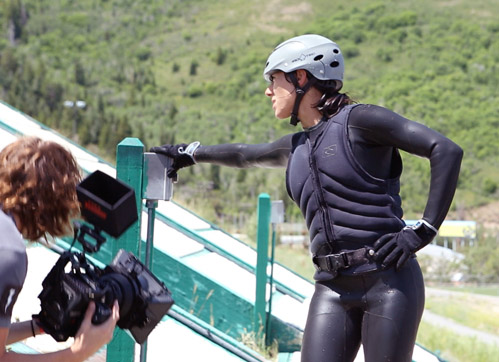 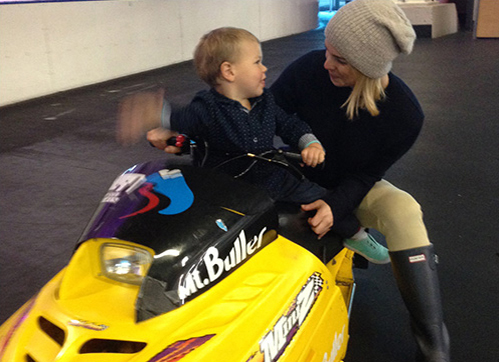