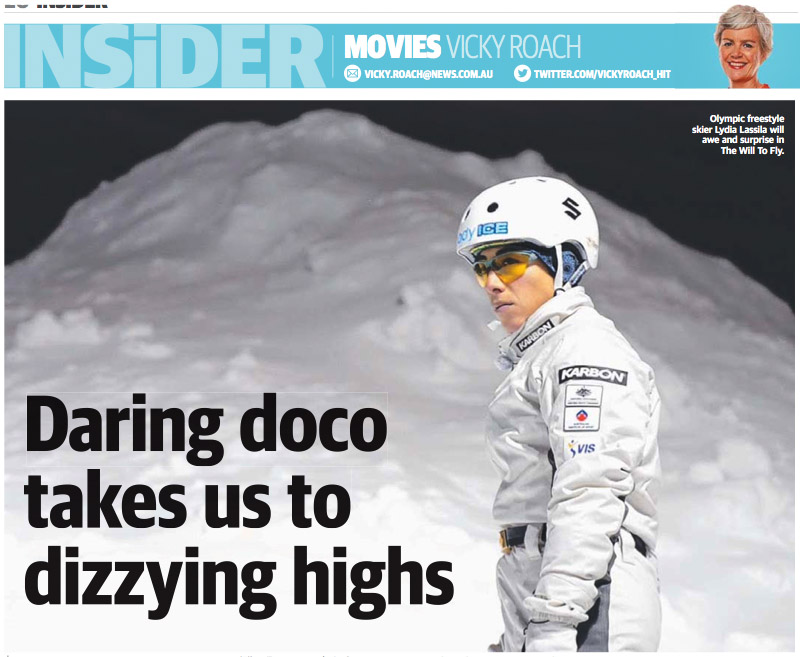 THE WILL TO FLY

These seemingly indestructible women (and men) catapult themselves into the clouds to perform neck- breaking aerial acrobatics without any kind of safety net beneath.

This has enough footage of serious accidents to make it clear how common they are (Lassila, herself, suffers a potentially career-ending anterior cruciate ligament tear at one point in the documentary).

But after seeing the aerial skiers crash land over and over again in their practice runs, you can’t help but wonder how they don’t injure themselves more often than they do.

The Will To Fly is appropriately titled, then, since there’s a hint of Icarus in the athletes’ crazy quest to outdo each other with increasingly complex stunts.

When Lassila, who hails from our sunburnt land of surfers and cricketers, becomes the first women in the world to pull off a quadruple-twisting triple somersault, the most predominant emotion is relief, particularly after she fumbles the landing.

For a film to be “inspirational”, as The Will To Fly is described in its promotional material, audiences must feel a common connection with the main character. In the face of Lassila’s extraordinary drive, self-discipline, determination and courage, most of us can only stand back in awe.

There is a chink of common vulnerability, however, in Lassila’s struggles to re-find her form after giving birth to son Kai.

And the reaction shots of her mother and mother-in-law put the extreme athlete’s stunts into a more ordinary, everyday context.

Their inability to watch as Lassila competes at the Sochi Winter Olympics in 2014 speaks volumes.